The new phase of lockdown easing helped the Portuguese economy, confirms the Bank of Portugal's daily indicator of economic activity.

the economic activity in Portugal improved in the week after Easter, marked by the reopening of cafes and restaurants terraces. “In the week ended on April 11th, the daily economic indicator (DEI) registered a year-on-year change higher than that of the previous week,” the Bank of Portugal (BoP) said in a statement.

The daily indicator of economic activity (DEI) is published every Thursday by the BoP and is calculated from a series of information such as heavy goods traffic on national highways and card payments. 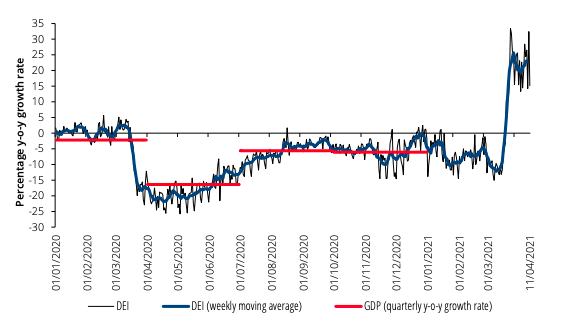 The DEI’s readings are based on a year-on-year comparison. That is, the increase is the comparison with the first confinement caused by the pandemic, according to the country’s central bank.

“The recent evolution of the DEI is strongly influenced by base effects resulting from the events observed during 2020, which significantly affect the year-on-year evolution of the activity in 2021,” the BoP explained.

The rating agency upgraded the outlook on the Portuguese banking system to "stable", as a result of improving economic conditions as the country recovers from the pandemic.