Public debt, from the point of view of Maastricht (the one that interests Brussels), rose by 2,333 million euros to 264,379 million euros in April, the highest ever value of public debt stock. The data was released this Wednesday by the Bank of Portugal.

It should be noted that the evolution of the monthly value of public debt is influenced by several temporary factors each month, so this value is more volatile than the ratio to GDP. The effort required from the State because of the pandemic should partly explain this sudden rise in April and May, but it should also be noted that these months preceded the 10-year debt repayment, to the value of almost 8 billion euros, on June 15. 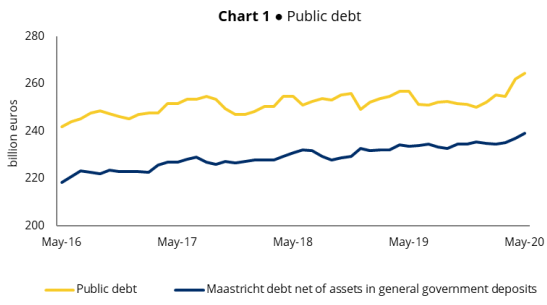 In the first quarter, the public debt ratio, i.e. the stock compared to the size of the economy, which is the most widely followed indicator at the international level, had risen to 120.3% of GDP in a period in which GDP fell 2.3%. The public debt ratio had closed in 2019 at 117.7% of GDP. The government expected in the State Budget 2020 to end 2020 at 116.2% of GDP, but the pandemic has replaced the figures with the forecast now being 134.4% of GDP.