These last weeks seem like decades vis-a-vis the beginning of the year. Certainly for the Ukrainian people and also for the Russian people.

There is an expression attributed to another Russian named Vladimir, in this case Lenin, that more or less follows this text: “There are decades where nothing happens, and there are weeks where decades happen”. These last weeks seem like decades vis-a-vis the beginning of the year. Certainly for the Ukrainian people and also for the Russian people.

After 7 weeks of the invasion of Ukraine, the former virology experts are now new experts on weaponry and geopolitics.

Not wanting to be one more, I will try to lay out some facts, to try to understand some dimensions of this conflict beyond the destruction and humanitarian catastrophe that we all watched live.

Interestingly, the eastern part of Ukraine holds the second largest natural gas reserves in Europe (after Norway, which is behind Russia of course). At the same time the territory of Crimea also has offshore energy reserves, only 80% of the oil and gas reserves that Ukraine held.

Venturing into speculation, perhaps Putin wants from the beginning to capture more energy resources than to “ensure the security” of Russian speaking populations.

The Russian people’s capacity for suffering has already guaranteed victories against Napoleon and Hitler, wars where whoever endures hunger and cold the longest wins. The crucial question now is how long can Europe resist such high energy prices before its own people revolt against their politicians? In parallel, can Russia find an alternative buyer for all the gas it exports to Europe? Pipelines to China can’t be built in a month either.

As if that were not enough, China remains in an ambiguous position vis-à-vis this conflict, hesitating to explicitly condemn the invasion on the one hand, but trying not to alienate the West on the other. China has annual exports of $68 billion to Russia. For Europe and the United States the figure is over $1 trillion. The reconfiguration of these geopolitical and economic balances will have effects that are likely to follow us for decades to come.

Many of the political and military conflicts are generated around ownership of and access to energy resources. If Europe did not depend on Russian energy, Putin would never have dared to invade Ukraine.

This escalation of oil and natural gas prices will have consequences for the economies of the West. Typically a 100% rise in the price of oil generates a recession after 12 months of that rise, either because central banks are forced to react by raising interest rates to control the inflation generated, or because the rise in the price of energy constitutes in itself a “tax” to energy consumers (industry and final consumers).

The world economy did not need this crisis, and the Central Banks even less. By February 24 the inflation figures in the United States and Europe had already forced the FED to review the rate hike path (8 in total by 2022, according to market expectations). Now, the FED, ECB and BOE are faced with an even more difficult choice: Aggressively raise interest rates to control inflation trying not to overly harm the growth of Western economies, already grappling with an energy crisis and a shock derived from the sanctions imposed on Russia. The road that was already narrow is now made of thin ice. 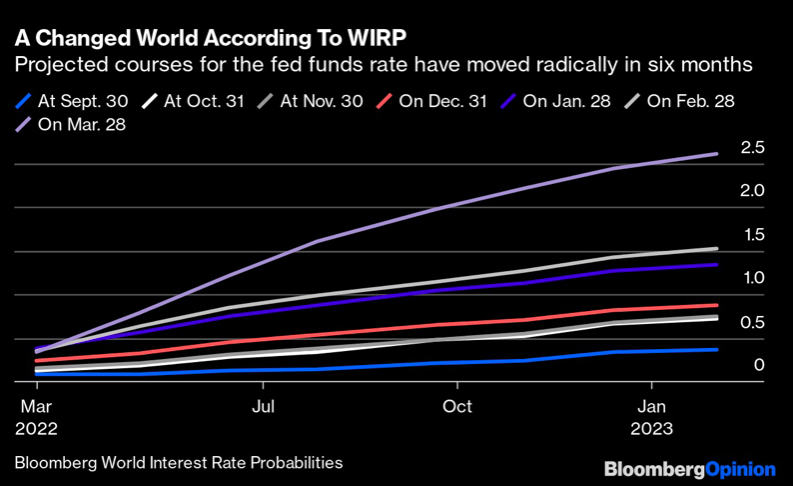 The last 8 sessions in the S&P500 through Wednesday March 30, had 6 of them up more than 1% in each. In the last 80 years, this has only happened twice. When they say “Buy when there is blood in the streets, even if the blood is your own”, you didn’t have to take it so literally.

The S&P500 ended up closing the month up 3.6%, despite falling in the last 2 sessions of the month.

Since the invasion of Ukraine the S&P is up 7.2% while the Eurostoxx50 is down -1.78% (numbers as of March 31, 2022) – The United States always wins from conflicts in Europe. However and despite the positive performance, this recovery in the S&P was made with little volume and little participation from institutional investors, so some caution is advisable.

Meanwhile in the Bond market (US Treasury 10 Year) the drop in the year is already -6.7%. Since last year the 10 year had lost -4.1%, we can safely say that this is a “bear market” in bonds. In fact, March is the worst month for bonds in 42 years. Adding to this scenario, the yield curve has also inverted, but for now I wouldn’t pay too much attention to this fact. More important is how long the curve remains inverted than simply having it inverted in the last few days.

The 60/40 or 40/60 (stocks/bonds) model no longer seems to be the right format for proper diversification and risk reduction in financial portfolios.  Diversification itself as a concept has to be rethought in light of the geopolitical changes we are witnessing: Diversifying equity and bond portfolios in autocratic countries/markets is statistically valid, but is the inherent risk adequately compensated in the long run? Those who have invested in Russia disagree, as do those who have invested in technology in China in recent years.

So a truly diversified portfolio will have to have growth assets on the one hand as solid companies with sustainable growth, able not only to withstand the occasional crisis but often to benefit from it, but also planning for less positive scenarios:

– What if the FED has to aggressively raise interest rates? Which assets could benefit?

– Or what if the energy crisis coupled with rising interest rates causes a recession?

– What would happen to the markets if the conflict in Ukraine spills over to other countries?

– Or if on the other hand it ends quickly?

– What if China invades Taiwan and the global economy runs out of enough semiconductors?

The list of questions is long and the answer is not simple. We have to be prepared to have assets in portfolios that do not perform well at all times but bring profitability in unexpected situations. Without constituting any kind of explicit recommendation, because it will always depend on the context of each investor, Gold can work in some of these scenarios, or typical refuge currencies such as the US Dollar and Swiss Franc. The essential thing will be to preserve flexibility through a diversification thought out in assets with liquidity to face an environment that will be challenging in the coming years.