Revisiting the vision of the Italian Master Becattini, the industrial district is a complex construct of industrial space organization that gives expression to capitalism with a human face.

The sequence of this note takes place in three movements. First, what is an industrial district. Second, what are and where the industrial districts are located in Portugal. Third, what are the policy clues that we can claim, aimed at a more homogeneous distribution, in spatial terms, and an increased specialization of these complex forms of organization and business bricolage of industrial space.

Revisiting the vision of the Italian Master Becattini, from the introduction to the ‘Handbook of Industrial Districts’, the industrial district is a complex construct of industrial space organization that gives expression to capitalism with a human face, that is for: “rich contexts whereby the realisation of peoples’ capabilities and goals concur to a collective benefit, whilst rewarding the person not only in monetary terms but more importantly in terms of social recognition and ascent”. It also emphasizes the crucial role of the innovative entrepreneur/founder and his social (or relational) capital, in fostering the sustainability of the industrial space.

Under the Emades1 – Energy, Materials and Sustainable Development Project, the industrial districts in Portugal were recently mapped and classified, with the dual objective of identifying the nature of the specialization of the transforming activity, as well as inventorying the current industrialization capacity of our economy. For this, we used an adaptation of the Canello & Pavone (2016)’s algorithm, originally applied to the Italian industrial districts, which allowed us to find that only 20 of the municipalities of Portugal, denote a model of organization of the industrial district, among which, 13 are located in the North region, 6 are in the Central region and only 1 is located in the Alentejo region. According to the figure of the industrial districts in Portugal, per dimension, there is a non-homogeneous distribution of a very limited number of industrial districts, which unveils the weak industrial capacity installed in the national territory, with a certain spatial concentration in the North and northwest part of the Centre region. The traditional nature of the specializations of industrial districts has not only remained, since the ‘Porter Report’, as accentuated by the negative side, since it is limited, fundamentally, to industrial activities related to the textile and tannery sector, where the predominant coexistence of micro and medium-sized production units (e.g. two micro-dimensional fold), attests well to the resilience, flexibility and social capital (or relational) of the entrepreneurs/founders, who contribute positively to the exporting performance and productivity of this type of units. However, it does not restrain the mobility barriers to production and distribution/marketing, at a larger scale, with its own brands, placing a strong emphasis on the transformative dynamics of innovation and internationalization. Unsurprisingly, in terms of the most representative productive activities, it is observed that the transforming activity of specialization with greater prominence is limited to the clothing industry. The leather industry is the processing activity of specialization that presents, in average terms, a higher concentration of employed population and production units.

Finally, in terms of policy clues, it is important to distribute the industrial space in Portugal in a more homogeneous way, this should be done through the implementation of a reindustrialization plan based on networks of industrial districts, characterized by the diversification of related productive activities, but with greater specialization. Connecting services to industry; developing new high-tech industries; transferring the existent knowledge and technology in the national network of science and technology for the national industry; fostering coopetition alliances between industrial units with different sizes; facilitating the internationalisation of technology-based start-ups; and qualifying micro and medium-sized companies with doctorates in engineering, management and technology; are benchmarks for priority actions to operationalize the urgent business bricolage of the industrial space in Portugal. 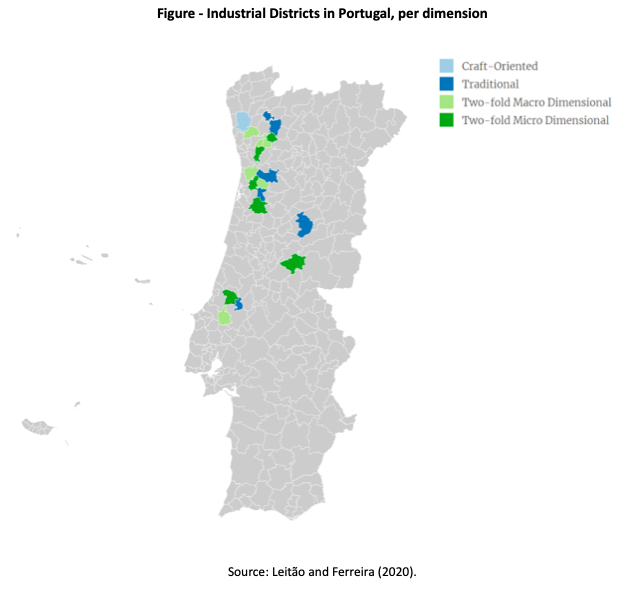