A delegation of businesspeople and managers, led by César Araújo, participated in an annual gathering of an international association for professional clothing. And they did come back with awards.

Historically, the textile and clothing sector has been one of the most valuable Portuguese industries in the world, notwithstanding the recent challenges that a globalised market has produced over the last decades. In this context, ECO followed in exclusive a visit of a delegation from the Portuguese National Association of the Industries of Clothing and Confection (ANIVEC), composed of several businesspeople, who attended the Professional Clothing Industry Association Worldwide’s global summit and 10th anniversary gala, taking place at the beginning of last week in London. For the President of ANIVEC, César Araújo, events like these are important to “give Portuguese companies a platform where they can diversify markets, sell products and promote their brands abroad”.

The venue chosen to host all the leading professionals of the industry coming from across the globe was the mythical Montcalm Hotel at the very heart of the charming Marble Arch, 5 minutes walking distance from one of the world’s most frenetic and luxurious showcase, Oxford Street. The PCIAW summit began on the 18th of June with an opening address delivered by Mr César Araújo, who is also PCIAW’s Board Director.

The Portuguese businessman highlighted in its opening remarks on the importance of PCIAW as an international organisation for cooperation within the sector, working almost as a permanent link between the buyer and the supply chain. For the Founder and CEO of Calvelex, a renowned Portuguese textile company, not everything is about business and profit. As he stressed in his first address to the audience, Mr Araújo reminded that consumers are becoming more demanding with regards to sustainability and social responsibility. According to him, “With these new challenges, new opportunities arise namely material development, circular economy, and new emerging business models.”

The different panels and speakers covered a wide range of topics, focused on the challenges and opportunities facing the sector. In line with that, an intervention by Mr Adam Mansell, UKFT’s CEO (UK Fashion and Textile Association), informed the audience as regards to the impacts that Brexit is likely to produce on the industry, stressing, nonetheless, that leaving the EU could potentially bring upon higher levels of investment within the British internal market. The audience was composed of business delegations from all across the world. Among them, it was the American, British, Canadian, Indian, Russian, French and German delegations that turned up in larger groups.

Portugal “in the vanguard” of the sector

While leaving the summit and during a conversation that took place before our interview, Mr César Araújo shared with us what he says is the international partners’ perception of Portugal, describing it as “a friendly country” that was always “ in the vanguard” of the sector.

What competitive factors does Portugal bring into the industry at an international level? Always staunch, Mr Araújo said that “Portugal has done a brilliant job over the last couple of years, building a worldwide referenced industry. Our textile and clothing companies are among the best in the world, but still, we need to take a bigger step forward into conquering the value chain. That is precisely what we are doing right now.”

Portugal is not a low-salaried market anymore if one compares with other countries. That was precisely what a member of the Indian delegation, who preferred not to be identified, confided ECO. His company used to have a factory operating in the north of Portugal, but due to the country’s slow appetite for modernisation and a high labour cost led to a decision to move the operation somewhere else. How to sell the Portuguese Textile and Clothing industry to a foreign investor, then? In response, the Portuguese businessman argued that “Portugal is a safe and good port, meaning that we are stable and that we deliver on time. We also have top-quality workers and, therefore, reliable in the product they make, bringing added value to our clients. But Portugal needs to step-up the game and be present at the world’s biggest forums for the sector, having a stronger voice to deliver the message that our country’s industries can expand to other business opportunities, namely professional clothing.”

On the following day, 19th of June, the ANIVEC delegation was welcomed by His Excellency Manuel Lobo Antunes, the Portuguese Ambassador to the United Kingdom, as well as by the Economic and Commercial Counsellor of AICEP in the UK, Mr Rui Boavista Marques, at the emblematic building of the Portuguese Embassy in Belgravia, London. The reception was held privately, with no access to the press, where the various delegates had the chance to present their businesses to the Ambassador. The delegation then returned to the Montcalm Hotel, where the PCIAW Awards 10th Anniversary Gala was to take place later that evening. 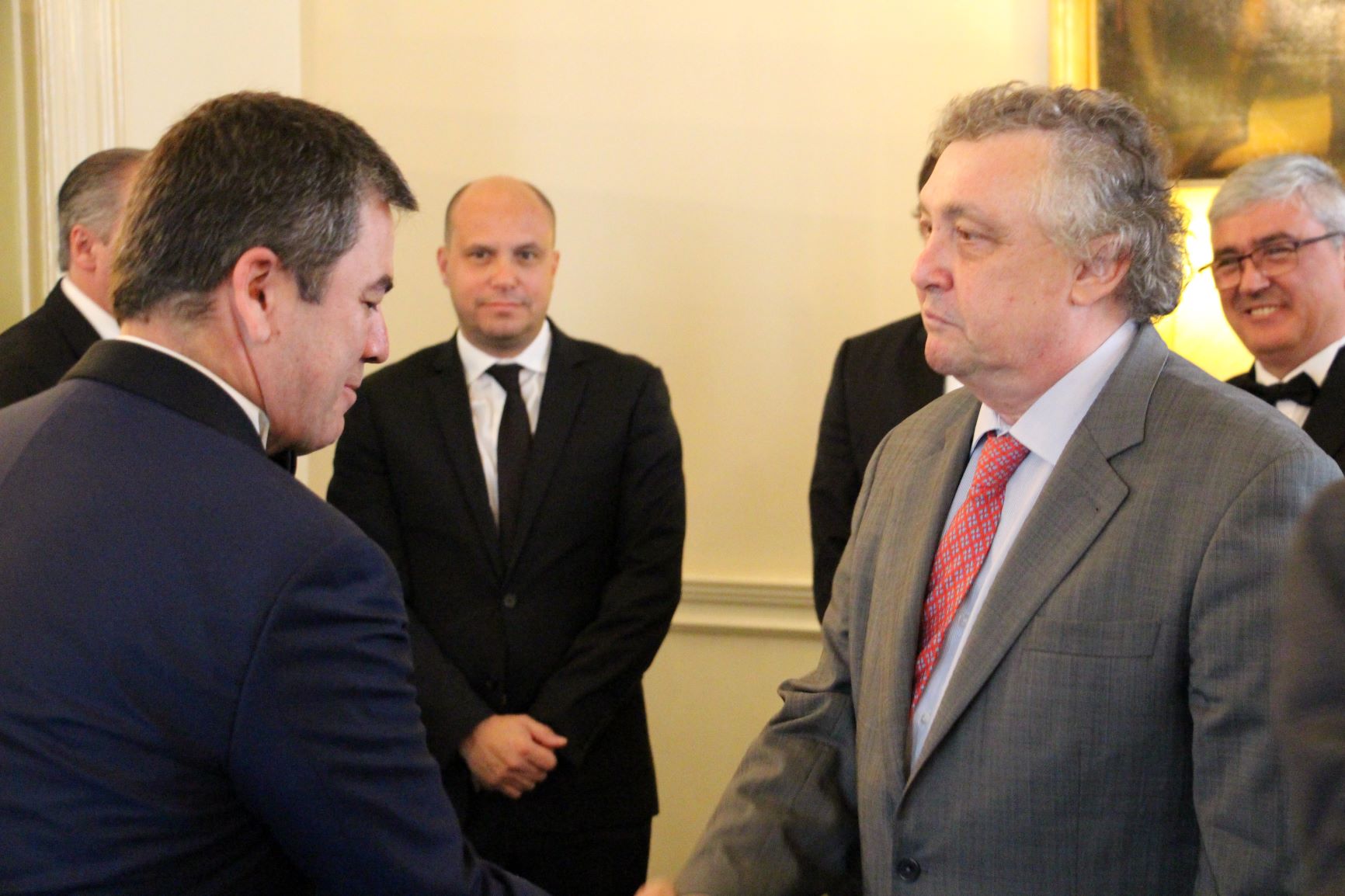 Before the gala started, ECO spoke with some of the Portuguese delegates. Alexandre Freitas, a consultant for the National Centre of Textile Intelligence (CENIT) highlighted that the textile and clothing sector has been growing uninterruptedly for ten years, being highly considered at a European level. “Portugal, being a small country, is one that welcomes the textile and clothing market with quicker delivery of high-quality products”, which rejects the idea that the sector is somehow blocked by atavism and lack of competitiveness. For Alexandre Freitas, such perception could not be further from the truth: “In Spain, it is true, one can observe a reduction of export volume in the sector. In this context, Portugal is gaining ground by conquering Spain’s traditional market and getting closer to Italy”. The consultant also mentioned the growing concerns of the industry about circular economy and digital transformation, noting, however, that there is not yet a sector strategy in Portugal that aims at tackling those issues.

In the same manner, ECO spoke to Matilde Vasconcelos and Ana Santos, Founder and CEO and Production Manager respectively of Trot & Trotinete, a company based in Leça do Balio, who focuses on design and trade of professional and scholar uniforms, counting more than 25 years of experience. The target of this company has been product development, betting on partnerships with internal and external stakeholders, such as the University of Minho. The increasing importance of digitalisation in the sector was also a topic for our talk. In that regard, Matilde Vasconcelos stressed the enormously positive impact of the creation of an online platform that not only allows the user to order and manage stock but also personalised the access of parents, for example, to buy uniforms for their children without any complication nor intermediaries. About the professional clothing industry, the value of the industry combined is about 80Bn€ in Europe. For comparison, one should take into consideration the American market of professional clothing, valued at around $250Bn.

Later that evening, the PCIAW Awards Gala was hosted by the famous British TV Star Anton du Beke. However, he was not the only star shining that evening. Axfilia, a Portuguese company represented by her CEO, Maria José Machado, was awarded the trophy for Best Newcomer (Company) to the sector of this year.

About the Professional Clothing Awards, César Araújo highlighted their importance for the industry: “This event has now been done for 3 years. It was ANIVEC and Calvelex’s initiative. As PCIAW’s Board Director, I have special care in transmitting the message to our partners that Portugal is a country where they can buy with quality, impeccable delivery time and competitive prices. The fact that I am Portuguese and work in the industrial sector also helps Portugal to be on the frontline when the discussion topic is production.”

Is Brexit a concern for the Portuguese Textile and Clothing Industry? “Yes, Brexit is a headache, pardon my expression. We do not know how it is going happen and in what terms it is going to happen. This brings an enormous instability to companies and stakeholders because nobody can predict its consequences. There is also the currency problem, creating additional uncertainty because it is a factor that influences management and the activity of international business at the end of the day. Thus, our position about Brexit is that we are going to follow it with calm and attention, no matter how difficult it will turn out to be.”