Wytse Kaastra, CEO of Sustainability Europe at Accenture, was in Portugal during the Web Summit. He believes that technology is essential to sustainability and expects positive outcomes from COP26.

There are two ways of looking at the current state of the world in terms of environment and sustainability. Either the glass is half empty or it is half full. Wytse Kaastra is clearly an optimist. “I hope COP26 will end with clear additional commitments, especially for 2030,” says the CEO of Sustainability Europe at Accenture.

Wytse Kaastra is also an ardent advocate of the role that technology can play in transforming businesses, making them more sustainable. And that the recovery plans underway in Europe are a game-changer when it comes to the environment. “It’s the only option we have. 2030 is eight and a half years from now, so this is our only chance. The amount of investment we are putting in, through the EU, but also in individual countries and companies, has never been higher. It is the biggest reinvention of Europe after World War II,” he says.

The former managing director utilities – energy transition Europe at Accenture is more reticent about Brussels intervening in the management of energy prices, which are skyrocketing.

The world is meeting in Glasgow to discuss climate change and sustainability. What are your expectations for COP26? Will it have any practical effect?

The hope is enormous. We had a good kick-off in Paris in 2015, but now is the time to take action. Base on our study – The United Nations Global Compact-Accenture CEO Sustainability Study – we saw that everyone is starting to warm up in a positive way, but we don’t see clear enough action to reach the goals. Only 30% to 40%, depending on the industry, have stated they have targets set for 2050 – let alone 2030. I hope COP26 will end with clear additional commitments, especially for 2030. It is still early for any kind of predictions, the stakes are extremely high among the European Union (EU), the United States, China and the rest of the world. Europe clearly wants to lead, is leading and setting very clear targets for 2030, and the rest of the world needs to step up. The CO2 pricing mechanism on a global level will be critical. We need a global incentive to work on these CO2 reduction targets. In Europe, we now have clear legislation and the mechanism to punish and reward companies that are doing a good job, but we need that mechanism at a global level in some form or shape. That is the ‘hot potato’ on the table now in Glasgow, and let’s see what comes out of the summit next week.

China and Russia, which are among the world’s biggest polluters, have sent delegations. Doesn’t the absence of leaders send a signal that they are not that willing to compromise?

It would have been better to have them at the summit. I am somewhere between hopeful and worried. The G20 in Rome was a bit of a disappointment in terms of outcomes, but you never know if they might have something up their sleeve that they release (this) week. Sometimes in just 24 or 48 hours, these things can take a positive turn. But I’m a spectator from a distance, so I don’t know. What I do know is that CEO and corporate commitments are higher than ever. We need support from governments, regulations, but I truly believe that many of the big companies in the world are taking the right steps.

I hope COP26 will end with clear additional commitments, especially for 2030.

Paddy Cosgrave criticised COP26, saying that they don’t seem interested in the startups that are innovating in order to achieve their decarbonisation targets. Is technology the solution or is it just creating another set of problems?

Technology, together with finance is going to be the engine for what we need. From electric cars to charging, to creating new green hydrolysis, digital is embedded everywhere and is critical to success. Startups have a role, they are mostly more innovative, creative and agile, and can afford to fail faster. Our big clients are very committed to working with them because they will be the accelerators, the agents of change. COP26 is more governments setting top-down goals, it’s much more interaction between Europe, China and the United States. The future is much more collaborative between areas and companies like Amazon, Google, Microsoft, and we need to do it together. There’s no single company that can single-handedly make a radical change, they have to collaborate.

At the Web Summit (WS) did you see any startups to keep an eye on?

I confess I didn’t have much time to visit the summit, but technologies like Artificial Intelligence are increasingly interesting to optimise how operations are managed, how the supply chain will evolve, where CO2 emissions will occur. Blockchain can be very interesting for supply chains, tracking CO2 emissions along the entire chain from China to Lisbon. There are many startups in that area and in WS as well, certainly. Who will come out the winner I don’t know, possibly 10% will explode and 80% will fall flat. 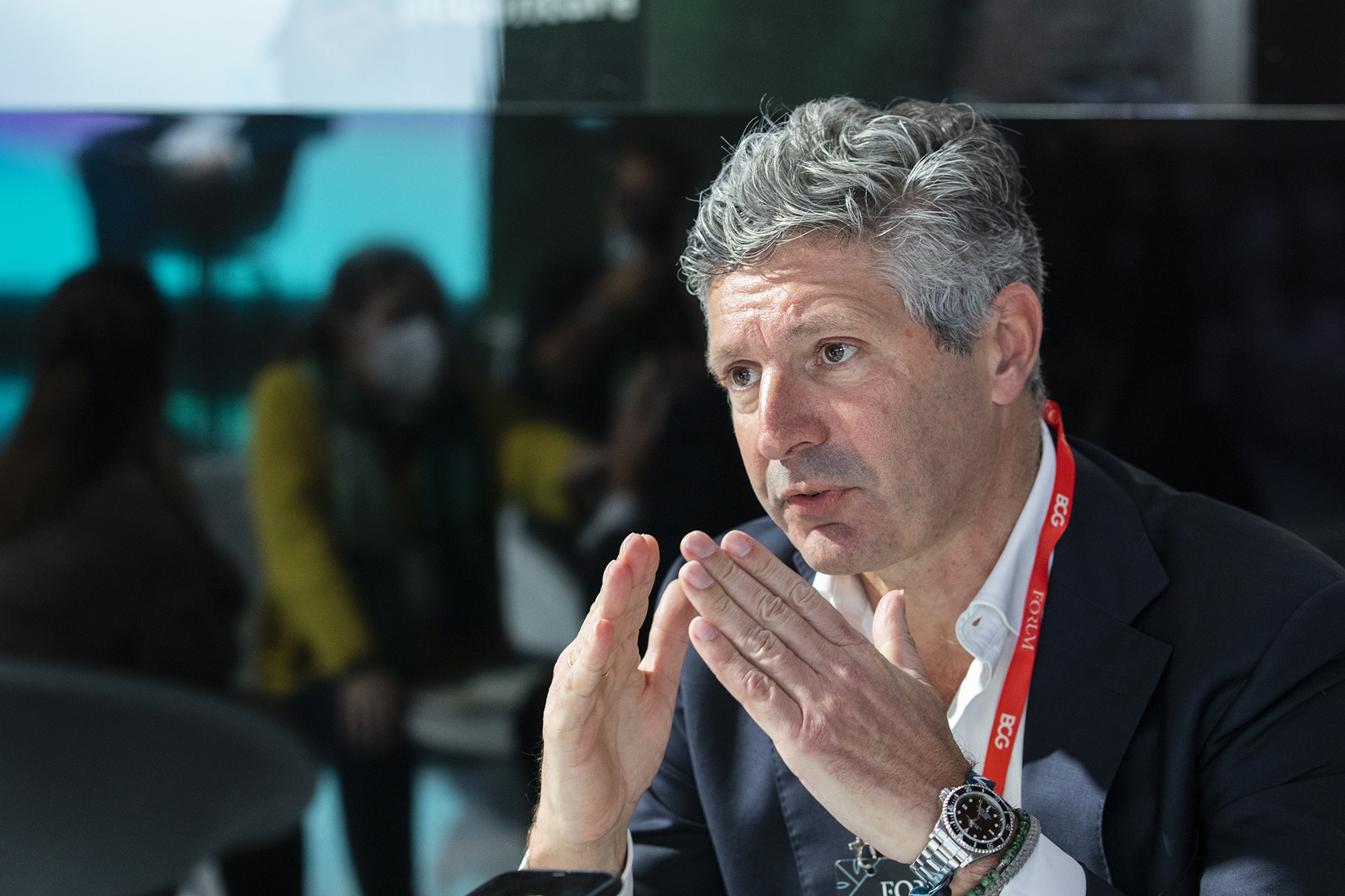 You mentioned electric cars and blockchain. When you asked whether technology would create new problems you thought, for example, of batteries and their impact on the environment or the increase in energy consumption with cryptocurrencies. It sounds like a catch-22.

When I was talking about blockchain I was not referring to cryptocurrencies. It’s not an Accenture point of view, but I think it’s crazy what’s happening. It’s a shame what’s happening with bitcoin in terms of energy consumption. We are very disconnected from that world, we look at blockchain mostly as a traceability process in the supply chain. It has to be energy efficient and the energy it consumes should ideally be green. It has to be sustainable in its design.

In the case of electric cars, we have to recognise that we are still at an early stage of the evolution of innovation. The first step was to create electric cars with distance capability – we’re there now, we’ve seen a massive boom in terms of adoption – but we have to start working on the batteries and the supply chain. For example, many cars are made from steel and aluminium, materials mostly produced using fossil fuels. If you use green hydrogen, produced by wind, to produce green steel or aluminium, suddenly you can produce the same car with green steel and possibly pay a premium. These are technologies at hand that we can apply across the supply chain. So I am extremely optimistic. Although today is not perfect, all of this will happen in the next few years.

Everyone is strengthening the [sustainability] agenda, regardless of what happens in Glasgow. Not just because companies want it, but because employees and customers are asking for it.

49% of managers have realised there are problems in their supply chains, but only 7% have done their homework and implemented alert systems, says your report. Aren’t companies expecting too much from governments?

There are two ways of looking at this report. You can take a positive view: there are a number of companies committed, involved, and on the other hand, you look and say not enough is being done. I prefer to take an optimistic view and say we need to do more, not just that we haven’t done enough.

There has been a tendency to point the finger at others. It’s not me, it’s the government; it’s not Europe, it’s China; if it’s not China, it’s Mr Trump. In my conversations with clients, predominantly European-based, whether it’s energy or automotive, everyone is strengthening the agenda, regardless of what happens in Glasgow. Not just because companies want it, but because employees and customers are asking for it. We ourselves are going to be carbon neutral by 2026, not because anyone told us, but because employees are asking us. For us, it’s relatively easy. We are a people business, but if you have petrochemical assets in 50 countries it is much more difficult. But I am very optimistic. All our customers are moving in that direction. We can blame the governments, but if you look at what the EU is preparing…

The recovery plans are very focused on the digital agenda and sustainability. Will they be able to turn the game around or is it just throwing money at the problems?

It will change the game and I think it is the only option we have. 2030 is eight and a half years from now, so this is our only chance. The amount of investment we are putting in, through the EU, but also in individual countries and companies, has never been higher. It is the biggest reinvention of Europe after World War II. It is a digital, sustainability transformation. It is the reinvention of the European economy to be more transparent, more efficient, more effective, removing all kinds of barriers and bureaucracy. We like to call it the twin transformation – digital & sustainability – but it is almost a triple transformation: it is the next generation of governments. Take Italy. It’s been a much-criticised country in the past, but what they are achieving now under Draghi’s leadership is impressive. We have seen it in Spain, in Portugal, in Germany, even in the UK. To me, all of that is very positive. Having said that, there is a lot of work still ahead and hopefully, China and the US will join the EU. Those are the two big blocks that need to come together.

Just because the prices are spiking, we shouldn’t immediately kill a market that has served us well in the past decades.

Are you familiar with Portugal’s RRP? Are we betting on the right chips?

I am not familiar with it. But every time I come to the country I am impressed by the level of international orientation, perhaps because of the country’s DNA, the fact that the Web Summit is held here is a sign that they embrace innovation, the digital. I know some Portuguese companies in the energy area and you should be proud of the way they are transforming themselves for the future.

There has been an escalation in energy prices. There is an idea that Brussels could act in this market a bit like what happened with vaccines. Is that the way to ensure that rising prices will not impact economic recovery?

We should not be overly optimistic when looking at the EU. There is a lot that member states can do – don’t forget that the level of taxation on energy is extremely high, It has been a bit of a milking cow – they already have the tools to give some relief to what is going on. Secondly, in Europe, we shaped a market based on supply-demand model of business partners acting in a liberalised market. Just because the prices are spiking, we shouldn’t immediately kill a market that has served us well in the past decades. What we are seeing is the result of a perfect storm – with Covid, production went down; because of the energy transition, there were not as many incentives to pump enough energy; there has been some political tension with Russia – and it all resulted in price spikes. In a year or two, we will be back to normality. We just have to navigate in a smart way. I don’t expect the EU to play a critical role here, but I could be wrong.