DBRS points out that banks in Portugal have managed to reduce non-performing loans (NPLs), but the end of the government's support measures should affect this specific indicator.

DBRS Morningstar warns that although the cost of credit risk for European banks in the first quarter is almost back to pre-pandemic levels, they are unlikely to be maintained. In Portugal’s case, there was not even a drop in the cost of risk (CoR), but rather an increase, the Canadian agency noted.

“In Q1 2021, banks in all countries, except Portugal, reported materially lower levels of CoR than in Q1 2020,” DBRS points out in a statement. Compared with 2019, “Only banks domiciled in Spain, Portugal and Italy reported on average higher levels of CoR.”

Of the 32 banks included in the study sample, 12 reported an above-average CoR in the first quarter of 2021, which were based in Spain, Italy and Portugal. This phenomenon “could be partly influenced by their still large stock of legacy NPLs,” DBRS signals. The CoR levels were close to the pre-pandemic run rate, at banks such as BBVA, Santander, BCP and BPM, Liberbank, Bankinter and Intesa. 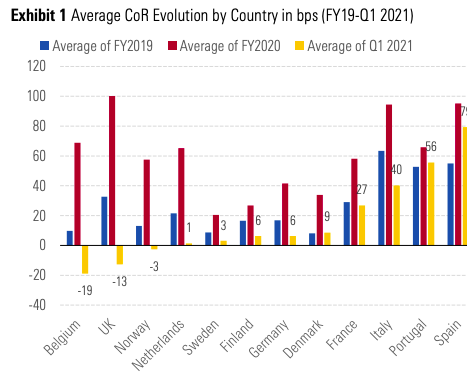 The agency points out that the increase in CoR of banks domiciled in Portugal “could be partly explained by the fact that these banks did not reflect the impact of macro-economic downturn driven by the pandemic in their credit models until Q2 2020 and onwards.”

As for non-performing loans (NPLs), DBRS notes that banks in Portugal have managed to reduce them. Still, it says it expects a “deterioration of asset quality to emerge when governments’ support measures are fully removed.”

In total, Brussels today released €14.13 billion to 12 member states, with Portugal taking €2.41 billion, the second under SURE, after having received in December the first payment of €3 billion.

Tourism sector “will recover fully but not this year” – DBRS